Michael Eder earned a Master Brewing Degree at Doemens Academy in 2003, and studied at the Technical University Munich - Weihenstephan from 1992 through 1994.

Michael holds the position of Production Manager at Doemens Academy, and he has worked as brewmaster in Ottakringer Brauerei (Vienna), Union Camerounaise de Brasseries (Cameroon), and Ginga Kogen Beer (Japan). Michael teaches in the World Brewing Academy (WBA) Master Brewer, International Diploma and Advanced Brewing Theory programs in both the Chicago and Munich, and organized and conducts the European Brewing Study Tours.

Michael teaches in the following courses: 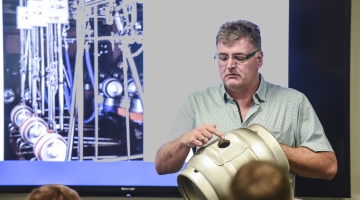 The WBA Advanced Brewing Theory Program (ABT) gives students a...

Siebel Institute of Technology is approved by the Division of Private Business and Vocational Schools of the Illinois Board of Higher Education.

Download our Academic Catalog for more information on how the educational offerings of the Siebel Institute of Technology can kick-start or improve your brewing career!